Zip Recipes  5.0.11 was released today. This release contains an update to the Twig library, which will resolve some conflicts with other plugins also using the Twig template engine. Because the Twig version was several versions behind, this started to cause conflicts if another plugin was used with a more recent Twig version. The update also lowers the plugin size, and should prevent issues that could cause some files not to get deleted during an update. On some hosting environments not all files were deleted, causing the plugin to “disappear”, while at the same time it wasn’t possible to install the plugin again: the plugin folder still existed. Because this update requires the old files to get deleted first, it is possible this issue can occur one more time, after this update it should be fixed. If you encounter the “disappearing plugin” issue during the current update, please contact us and we’ll resolve the issue for you.

Additionally, we made some small improvements:

This release paves the way for some real improvements we have been working on. Stay tuned! 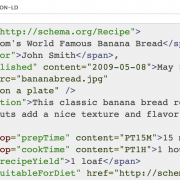 Get Your Recipes To Pop-out and Get Noticed

What Life in a Developing Country Taught Me About Food

schema.org for recipes, JSON-LD or Microdata?

Want to join the discussion?
Feel free to contribute!